The world of sports is highly enticing and enormous and the career options in the sports industry – both on and off the field – now becoming a high-potential alternative option to children and young adults.

Parents and schools have long ignored sports as a career option. Only those who play the sport professionally garnered a significant amount of reception and recognition. However, the rules of the game have changed and today’s youngsters are showing interest in making a career in the relatively obscure yet largely unexplored sporting industry that most miss out on.

To give some more insight into the ins-and-outs of the sports industry and help parents with their decisions, we have compiled a list of career prospects in the playing and coaching field ranging from coaching to umpiring and everything in between.

The most glamorous yet toughest one. Becoming a successful professional athlete in any sport is no easy task. It requires intense passion, an unreserved commitment, and an unparalleled devotion to the sport as they compete against hundreds of thousands of athletes with the same aim, but only those who prove their skills and are completely devoted to their goals will make it to the top.

Ace para-shooter Avani Lekhara is one such name in the Indian contemporary sports scene who has gone through hell and high water to become India’s first Paralympic gold medallist in Tokyo. The 20-year-old suffered a horrific car accident at the age of 10 resulting in not only spinal cord injuries but also made her wheelchair-bound, but she didn’t let injuries deter her from pursuing her dreams. She fell in love with shooting after joining a session where she found passion, a connection to sport, and a community. Fast forward t0 2022, she is India’s first woman to win a Paralympic Gold medal with new a Paralympic record and equaled the world record, making her one of the living embodiments of what sport is all about.

From grassroots to elite level, coaches play a fundamental role in the growth and development of athletes both on and off the field. The roles vary from sport to sport and age to age from youth coach to academy coach as every level has different responsibilities which require different skill sets.

Regardless of which sport you play; one cannot deny the fact that the quality of coaching greatly determines the quality of the entire sport. There is a myriad of career options available for aspiring coaches. With the likes of the Hockey India, All India Football Federation, and Boxing India Federation along with many league clubs always keen to offer a well-designed program for coaches from across the country to help them in being well-versed with the modern sports environment. Also, recruit coaches for various age groups and other departments, the time has never been better to be a coach.

And to name a few in the realms of coaching, who have been transcending the coaching scene in the country, India’s U-16 football team coach Bibiano Fernandes is up there, who is building a team for the present and future with exciting young players coming through the ranks along with a strong youth setup and proper scouting network tapping talented young footballers and bring them under the federation’s wings.

And another one is India’s youngest ‘IAAF Level 2 Coach’ Mohamed Azarudeen, who used to be a talented 800m-runner himself, but his career was cut short by injuries before he could turn into elite. Azarudeen is currently growing a crew of rising young stars who are making the biggest impression in middle and long-distance running and setting sights on the Paris 2024 Olympics.

If you love sports and have a passion for teaching, then a career as a physical education teacher might be what you are looking for.

PE teachers play an important role in enabling students to have fun on the field, pass on the love for sports and instill key values such as teamwork and sportsmanship.

If you are mulling over the idea of a career at the elite level of sports, this may be an ideal choice for you.

A strength and conditioning coach or athletic trainer/instructor are a miracle worker who works closely with medical professionals and coaches to evaluate the entire development of an athlete’s physical performance: not just strength training, but also speed, endurance, agility, stability, maintain proper diets, injury prevention, treatment, and track progress towards health and fitness goals.

It takes education, certification, and experience to make a career in the field of strength and conditioning coaching field.

If you love sports and are fascinated by academia and also with the idea of doing research in a sports field, then becoming a sports teaching professor is one of the best jobs that will offer you that opportunity.

Sports teaching falls under broader categories such as individual and team sports and its vast theories. To meet the basic needs to become a professor at a reputed college or university one need to have a Ph.D. in a particular field and also need to clear the National Eligibility Test (NET) conducted on behalf of the University Grants Commission.

One of the hardest yet unappreciated jobs in the industry.

A referee does more than knowing the rules, blow a whistle, and show a card. They ensure that the rules of the game are followed, keep track of times, communicate effectively to all the parties, never shy away to express their opinion to officials, and judge performance in competition/matches to award points and determine winners.

Some of the key skills Refs should pose are decision making, communication, athletic, mental resilience to take criticism and perform under pressure.

Tejas Nagvenkar is one of the best football referees in the country who is inducted into the AFC referees’ panelist. Tejas finished his bachelor’s degree in physical education in 2012 and followed with a master’s two years later. He brushed aside too many traditional job opportunities to keep his focus on officiating. Tejas is a referee with vast experience and skill. He won the AIFF best referee of the year in 2020.

The educational qualification to become a professional referee vary from country to country, state to state, sport to sport and is sometimes determined by local sports association but a diploma, degree, and coaching certification would act as a great additional boost to your credibility.

Noticeably the above-mentioned list is incomplete as the careers listed here are closely connected with each other in many ways, and other employments not mentioned here can be brought to the table to provide virtually infinite possibilities. Don’t forget that there is a sea of possibilities out there. Who knows what’s coming next? Regardless of what happens, one thing we know for certain is that the future is bright if you are looking for a career in sports.

From irrelevance to hierarchy: How has ISL revolutionized Indian Football?

Exciting Career Prospects in the Sports Management, Analytics and Technologies 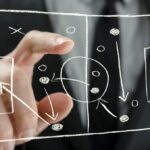