How To Start A Football Career In India? Football or soccer is the most-watched and followed sport in the world. Football in India has a massive following, just as cricket does. Though a football career in India is not considered the right career choice, the situation is slowly changing. Domestically, tournaments like ISL have boosted football’s image and popularity in India. It is no longer sports children play in their localities and isn’t restricted to Mohunbagan FC anymore.

Teams like Bengaluru FC have a massive following, and they also have a registration and selection process that is quite accessible. Having a football career in India is no longer a distant dream. Though the sport isn’t as popular as cricket on a national level, locally, football is a loved and cherished sport. Tournaments like I-League and ISL make football a viable career option for young aspiring footballers passionate about the sport.

Though India has never really managed to breakthrough in the FIFA World Cup, many Indians dream of the day when India can achieve this. Passionate lovers of football have established many academies and schools to train young children. These trained players play in tournaments like ISL and I-League. Some of the best football academies in India are as follows:

Established by Nirvan Shah and Anjali Shah in 2002. Both have featured prominently in Mumbai’s football scene. The school has conducted camps abroad and provides excellent exposure.

JRD Tata established the Academy to pay tribute to his father’s love and commitment to sports. The Academy provides intensive training along with all-round development. The Academy looks after every need of its young trainees.

Established in 2014, it was mainly led by the I-League winning team. BFC schools undertake extraordinary efforts to ensure the young trainees can learn from the best and reach professional levels in the future.

The great Indian footballer Baichung Bhutia established these schools to ensure young football enthusiasts in India could receive proper training. It is a premier institute for kids who want to pursue football professionally. The trainees are provided with match exposure, career guidance, and adequate studies.

The Sports School was established in 2019 with a vision to integrate education and sports for young aspirants and help them become professional athletes. World-famous mentors such as Rohan Bopanna, Robin Uthappa, and Pullela Gopichand train students in The Sports School regularly.

Football at The Sports School

The Sports School Football Academy is a collaboration with Bengaluru FC. The program aims to provide world-class training to aspiring footballers. The coaches have licenses from AFC and AIFF. The trainees’ evaluation is undertaken by the Youth Academy Coaches and Head of Youth Development of the Bengaluru FC.

There are regular friendly and competitive matches held. Talented students get a chance to play with BFC Youth Academy teams. Bengaluru FC  is one of the India’s most established football clubs, and this partnership makes The Sports School one of the best football academies in Bangalore.

Professional football training at The Sports School is provided along with expertise in sports science. Students are taught about strength and conditioning, nutrition, and injury prevention. The turf itself is certified by FIFA Quality Pro. The artificial turf measures 108m x 68m and goes through strict lab testing and FIFA certification criteria.

The head coach of The Sports School football program is Hason Khaleeli. Hason is a license holder of AFC. He has trained at the Football Association of Ireland. Over the past decade, Hason has worked with several grassroots programs to train players in Ireland.

Hason had been working with Bengaluru FC since its birth in 2013. He was the lead coach for U10 and U14, and he was Assistant Coach at the U16 and U19 levels. He became the head coach of the Football Academy of Bangalore in 2016, which gave this program an edge over many others in Bangalore. It is undoubtedly one of the best football academies in Bangalore. How to Start a Cricket Career in India?

How To Start A Badminton Career In India? 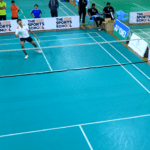