From Hitler’s admiration for the Indian Kabaddi team’s performance in the 1936 Olympics to teenager Shafali Verma disguising herself as a boy to play cricket, here are 50 Interesting facts that you might not have known about Indian Sports:

Any time of year is the right time to impress your friends, family, teammates, or coaches with your sports knowledge. Here, we uncover a mass of interesting factoids about your favorite sports and iconic Indian athletes that continues to fascinate and bring joy to millions across the country and around the world.

These facts are worth their weight in gold, so prepare to dazzle your friends when you share these obscure yet fascinating tidbits.

1) When Kabaddi floored Hitler & Co. at the Olympics

Adored by many here and enigma to outsiders, Kabaddi may now be a stranger sport to the Olympic stage, but many don’t know that Kabaddi first received its international exposure when India demonstrated the sports during the 1936 Olympic in Berlin and left Adolf Hitler and the Olympic Committee members in awe with their kabaddi moves.

Popularly known as the ‘Queen of Indian track and field’, PT Usha was the youngest Indian woman to participate in Olympics. At the age of 16 years and 69 days, she competed at the Moscow Olympics in 1980.

She was also the first Indian woman sprinter to reach the final of an Olympic track event.

Paralympian swimmer Sharath Gayakwad currently holds the record for the most number of medals won by an Indian at any multi-disciplinary sporting event.

Sharath achieved this in the 2014 Asian Para Games by winning six medals.

Indian Women’s Cricket team’s star opener and fan-favorite Jemimah Rodrigues is also a great hockey player and has represented Mumbai & Maharashtra Hockey teams in the U17 level before switching to competitive cricket.

5) The father of Indian Cycling

Apart from being an actor, production designer, writer, Jankidas Mehra is also a champion cyclist who broke eight world records between 1934 and 1942.

He was the first Indian to have hoisted India’s national flag (pre-independence) at the World Sports Congress. He was also the founder of the Cycling Federation of India.

The quartet represented India at the 1952 Helsinki Games.

7) Queen of the court

PV Sindhu is the first and only Indian to become the Badminton World Champion and only the second individual athlete from India to win two consecutive medals at the Olympic Games.

Kapil Dev, who is inarguable, India’s greatest ever all-rounder has never missed a cricket match due to an injury. He, of course, has missed matches and also was dropped once but has not missed a single match owing to an injury.

Sansarpur, a village with a population of 4600 in Jalandhar, Punjab has produced 14 Olympians who went on to win 27 medals for India in Field Hockey. In one particular Olympics, 7 players were from this village alone.

The 20-year-old footballer Dilan Markanday is the first British-Asian – as well as the first player of Indian descent to play for the English Premier League club Tottenham Hotspurs.

Shilaroo Hockey Stadium located in Himachal Pradesh is the world’s highest-altitude hockey stadium at around 8,000 feet (almost 2,500 meters above sea level) and is surrounded by Narkanda and Hatu Peaks.

Neeraj is truly a different beast with a javelin spear in his hand.

13) The golden age of Indian Hockey

In 1926, the India Hockey team toured New Zealand and played 21 matches of which India scored 192 goals and conceded only 25.

Indian football legend IM Vijayan holds the record of scoring the sixth-fastest goal (12 sec) in the history of international football. It was against Bhutan in the 1999 SAF Games.

15) A pioneer in Indian badminton

Prakash Padukone was the first Indian to win a hat-trick of Grand Prix titles including the Swedish Open, Danish, and All England crowns – all in quick succession.

Singh is the most common surname among Indian Hockey Players. Once during a match, a foreign journalist in his dispatch wrote, “Singh initiated the move. After dodging past a defender, Singh passed the ball to Singh, who centered it to Singh and Singh scored the goal with a reverse flick”.

Norman Pritchard who was the only Indian who participated in the Olympics of 1900 and bagged 2 silver medals was the first Asian-born to win an Olympic medal. Later, he went on to become an actor in LA in the name Norman Trevor.

The title of ‘Flying Sikh’ was bestowed upon Captain Milkha Singh by General Ayyub Khan of Pakistan after he beat Pakistan’s star athlete Abdul Khaliq in the 200m dash in Lahore.

Rahul Dravid has faced more deliveries; spent more time at the crease while batting than any other batsman in the history of Test cricket. Throughout his Test career, Dravid has faced 31,258 deliveries (5209 overs and roughly 735 hours 52 minutes) – a world record.

No other batsman has faced 30,000 deliveries.

Dhanraj Pillay, one of the greatest hockey players India ever had, is unsurprisingly also the only Indian to have played 4 World Cups, 4 Olympics, 4 Champions Trophies, and 4 Asian games.

In 2006, after the Melbourne Commonwealth Games, Abhinav Bindra had a career-threatening spinal injury but went through vigorous rehabilitation to change his posture. He won gold in the Beijing Olympics in 2008 after overcoming this injury.

23) Openers at the Lords honors board

Only 3 Indian openers have scored a century at the Home of Cricket – Lord’s: Vinoo Mankad, Ravi Shastri, and KL Rahul.

Vinoo Mankad was also the first non-English player to grace the Lord’s honor board.

24) The game of snooker was born in India

The game of snooker was accidentally invented in Jabalpur, India by a lieutenant of the British Army, Neville Chamberlain, in 1875. But it took more than 100 years before India had its first professional in the sport.

25) Blazing his own trail

Pankaj Advani is the only player in the world to win world titles in both long and short formats of snooker (15 red standard and 6 red) and both formats of English Billiards (Time and Point).

26) Conceding goals while signing autographs is not for everyone

As crazy as it may sound, Indian Hockey goalkeeper Richard Allen has the record of conceding just two goals in three Olympic Games. Apparently, he conceded one goal while signing autographs; in which the India men’s team won 24-1 and another was a rebounded effort in the finals of 1936, India won 8-1.

Durand Cup is the third oldest football competition in the world. The prestigious Indian football tournament was first held in 1888, is also the oldest in Asia.

Mary Kom is the only woman to become a world amateur boxing champion for a record six times. And the only woman boxer to have won a medal in each of the seven world championships.

Nikki Pradhan is the first woman hockey player from Jharkhand to represent India at the Olympics.

Nicknamed as ‘Flicker Singh’, Sandeep Singh holds the world record for the fastest drag flick in Hockey history with the speed of 145 km per hr.

33) Once a perennial contender

Khashaba Dadasaheb Jadhav was the first Olympic medallist of Independent India. He won a bronze medal in Wrestling at the 1952Summer Olympics and remains to be the only Olympic medallist who hasn’t been honored with the Padma awards.

35) Remember when the Olympics used to have an art competition…

Art was a part of the Olympic games until the 1948 Olympics and Chintamani Kar a sculptor from West Bengal won a silver medal for Great Britain.

Teenage Cricketer Shafali Verma’s father disguised her as a boy to get her enrolled in a cricket academy in Rohtak, which refused to admit any girls.

Neville D’ Souza was the first Asian footballer to score a hattrick in an Olympic Games. He was also the joint highest goal scorer at 1956

Singhs and Paes’ are the only father-son duo to win an Olympic medal.

40) One of the true legends of Indian Cricket

Vijay Hazare led India to its first-ever win in 1952 against England in Madras.

The 1975 edition was the last time a Hockey World Cup was played on natural grass. Since then, field hockey has switched to AstroTurf, changing the nature of the game.

Abbas Moontasir was the first Indian basketball player to be named in the Asian All-Star team after a brilliant showing in the 1970 Asian Games in Bangkok.

Football runs deep in Sunil Chhetri’s family. His mother Sushila Chhetri his aunts, and twin sisters have played for the Nepal women’s national team in the past. As a matter of fact, Chhetri’s father KB Chhetri, who was employed with the Indian Army, played football for the Services.

Indian archers Atanu Das and Deepika Kumari, who tied the knot last year were the first Indian couple to take part in the same discipline in an Olympic Games.

Jimmy George, who is arguably the greatest ever Volleyball player that India produced, was the first Indian to play professional Volleyball successfully in Europe.

Anju Bobby George was the first Indian medallist at the World Athletics Championships when she took the long jump (6.70 m) bronze in Paris in 2003.

India’s Balbir Singh holds a record of maximum goals in an Olympic final when he scored 5 goals in India’s 6-1 win against the Netherlands. The record is still unbeaten.

Don Bradman after watching India’s hockey game at Adelaide in May 1935 told Dhyan Chand: “You score goals like runs in cricket.”

Congratulations, you’ve officially made it to the end. You can now safely call yourself a full-time sports geek. 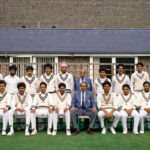 The story of how Indian Cricket evolved as the World Champions

From irrelevance to hierarchy: How has ISL revolutionized Indian Football?